In my local paper not too long ago, I read an article about someone trying to introduce a bill that would ban spanking for children under 3. Ridiculous, I thought, it’s never going to pass. And that was the end of it.

Then I heard her on a radio talk show, and I started to get cynical. I wondered if she was doing this just to get attention. It reminded me of Mayor Gavin Newsom’s publicity stunt of performing gay marriages (which I view more cynically than heroically, despite being for gay marriage). I’m still undecided because it seems unlikely that she could’ve calculated this media maelstrom, unlike the instant attention Newsom could count on. Here’s an article about her attention-getting: No-spanking bill’s backer – Mtn. View’s Sally Lieber – taking her turn in the spotlight.

Note to future self: If you want some instant national spotlight, do something “controversial.” 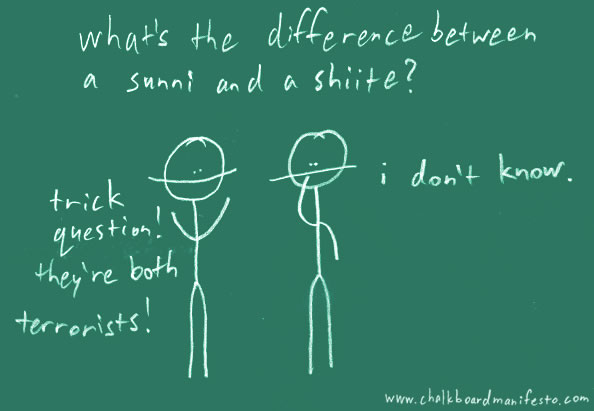 You know what? Before the war in Iraq started, I had no idea that there was this big schism within Islam. I had no clue that there would be sectarian violence because I didn’t even know about the different sects. I didn’t know that al-Qaeda was Sunni and Iran was Shiite. I had no clue.

But the saddest thing is that even now, the people in charge can’t answer the basic question of which one al-Qaeda belongs to. See this old article: Can You Tell a Sunni From a Shiite? And know that nothing has really changed. The American people delivered a rebuke to the near-criminally incompetent Bush admnistration, but who did they usher into Congress? Silvestre Reyes, the new House chairman of intelligence, can’t answer the question either.

My comic above is titled “global war on terror”. I meant it to be funny satire, but I don’t know if it’s so funny anymore.